Meet Maxxie .. The Dog Who Has Been Peeing In Our House Lately 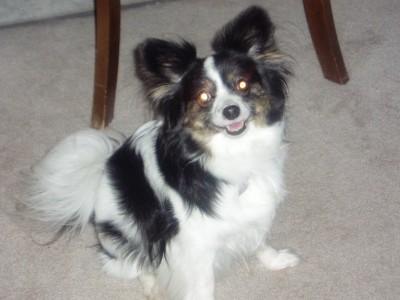 Maxxie’s a good dog. He’s about 9 years old now. Although it would appear that Maxxie is really a “mama’s boy” … and our other dog Sophie is “daddy’s baby gurl” … we all know who is the leader of our pack .. Sophie!

I’m not sure Sophie actually knows that, but certainly acts that way. Everything in the house, is hers. If I am playing with Maxxie with his little red rubber ball (I mean, Sophie’s red rubber ball) .. he will go fetch it – but, not bring it back. He waits – and then drops it in front of Sophie so she can take it away from him. We probably are a little to blame for this, because Maxxie never really ever brought back that dang red rubber ball .. and Sophie not only brings it back right to our feet, she will drop it on queue.

I work at home during the day. While both dogs might try to get my attention periodically during the day .. generally, Sophie is content to just lying on our bed and sleeping. Maxxie, on the other hand .. goes everywhere I go. It’s almost to the point of annoying, because he might be sleeping next to my feet while I’m working, or at the entrance of the room .. as soon as I get off my chair – perhaps, to get a report from my printer .. or pick up a file .. or even just stand up … Maxxie will get up too. If I go into the bathroom, he’ll try to scratch open the door to see if I’m okay. If I’m taking a bath (totally my fault on this one) for a power nap, and I leave the sliding door open .. he will come every 15-30 minutes or so and lick my forehead or hand to make sure I am still alive. If I even mention that I will be taking a bath, he will go lie down in the bathroom, waiting for me to come shave and shower.

But, after my shower – both dogs work together, to egg me on. Even before I am fully dressed, they will go downstairs and bark like crazy wanting to go outside. This might sound good – but, they don’t want to go outside to pee or do their other business. Nope! They want to go outside, (sometimes pee if they have to) .. but come in and get a treat. You see, usually in the first half of the year, as an Accountant .. I am off to many places and the bank, or post office or Canada Revenue or even shopping .. and they know my routine. My routine is to let them outside, and yes – I give them a treat before I go. Even our cat Zeussie Pussy Cat hovers towards the fridge, where we keep his Temptations treats!

But – March and April are the absolute worse for me. Some days, I have meetings all day, and clients are coming and going and picking up or dropping off their income tax information, and I am meeting with them. Meanwhile, Maxxie and Sophie are barking like crazy — and REALLY being annoying, until I give them a treat to shut the heck up. It’s a racket! All my clients (I believe) are all dog lovers, and know I have dogs and have met them many times .. and get a long with my dogs. It’s just those first 5-10 minutes that really DE-professionalizes the relationship and well .. starts to get to me.

So – Naturally, I’ve tried to add some dog training techniques in stopping the barking, but it wasn’t working. I came up with a better solution. I lock them in the bedroom, or the bathroom, or outside .. or in the office – where ever they are at the time – I removed them from my meeting.

At first, they were barking throughout the entire meeting, but after 2 months of being locked up .. at least they realized that after the meetings, I would let them out – and they stopped barking during that time.

Firstly, I didn’t need to REWARD them to stop barking, and I was not giving them treats.

Secondly, since about Mid April .. practically every day there was a new spot of pee somewhere in our house, on the second floor where our bedroom and my office is. This is not pee that was made when they had to go outside, but were unable to .. someone was definately marking. Pee began to appear in the same spots over and over and over. Two spots in the bedroom, and two in my office.

We mix Oxy Clean powder with hot water, and it activates and bubbles up. Then, we pour it on the spot where the dog pee’d and then bleed it with paper towels. Then, we put a towel over the pee and then I put one of those banker boxes filled with heavy files on top of it. Gets it out clean .. and without odor. But, my banker boxes were starting to get .. what’s the word .. destroyed – from being on top of wet towels over and over and over. We’ve seen Sophie actually pee in the same spot where one of the pee was .. but, it turned out to be marking where Maxxie was marking – because we soon caught him in the act.

So .. I came back to PetLvr and started to research my archives, trying to find articles how to stop a dog from marking, such as a post from last September .. called: Dog Marking Codes – Territory Marking and Dog Scent Mixing and other articles from around my Bloglines .. (sorry, can’t recall which sites they were all from).

This caught my eye in the article from this blog…

The urine contains messages to warn unwelcome visitors and members of other packs of the strength of the Alpha, his age, and how the pack is faring. Other markings such as gnawing on trees and rubbing ear wax into the ground are used as well. [Sometimes you might see your dog rub the side of his head on the ground. Heâ€™s marking.]

Domestic dogs imitate these behaviors when they feel threatened. Excessive marking and rolling in dung are signs of insecurity. Territory marking builds the dogâ€™â€™s confidence. Surely thereâ€™ a better way to build confidence, a way of correcting dog marking behaviors!

We believe Maxxie was marking, as a warning to his “predators” (my clients coming to the house) that even though he might be locked up in a room .. he is on guard! he is the alpha dog! and, it’s his house~! Maxxie was playing the part of “Protector of the House” .. and I think he missed that, being locked up. Really .. when my clients came, although BOTH dogs were working me to give them treats .. it was really Sophie who is unsociable, and doing all of the barking. Maxxie is the Social Greeter of our house and is very friendly with all my clients, trying to lick their hands, offering his head to be patted, etc etc etc.!

My wife noticed that, rather than lying at my feet in the office, or next to me .. he was lying in the front entrance TO my office – where people would have to go through HIM to get to ME! Also, when we watch TV at night, or eat at the kitchen table, where he would have normally sit next to the table, or on the couch .. he was now lying on the BACK LEDGE of the couch! Maxxie was turning into the new Alpha Dog! Although, interacting with Sophie .. she still plays that Alpha Dog part .. so, I guess Maxxie could be described as the “Alpha Security Dog” of our house! The solution seemed to be simple, to my wife that is.

DEMOTE MAXXIE BACK TO “PRIVATE” .. TO JUST ANOTHER DOG IN OUR HOUSE!

This has been hard. He’s no longer allowed on ANY furniture .. he’s not allowed on the bed – even at night! .. if I see him sleeping or guarding the entrance to the room – I am to stand up and walk through him, to make him move from that position .. and no more sitting on the back ledge of the couch, and being HIGHER than any of us! I won’t waste the morning away anymore, where I will take a shower and go out of the house. Now, I will pretend that I am going out of the house, but do not go anywhere, and certainly no treats at that time.

For me, it’s almost killing me inside, because Sophie is allowed to go anywhere .. on the bed, on the couch, etc etc .. But, we are definitely giving him a message – Sophie is Alpha Dog to Maxxie, but neither is Alpha Dog/person of this household .. we are!

And you know what?

There hasn’t been any pee in the house from Maxxie’s marking – since we started this experiment. It seems to be working for us! I thought I would write a post today, and pass along this story. Maybe doing something similar might help you stop your pet from marking in the house.

We don’t know how long we will continue to keep this up and if he will be allowed back onto the bed or furniture in the future … and, if we do .. will he start marking again?

Summer is coming, and we will be going out to the Victoria Beach cottage and country and Maxxie will have a new marking ground to pee everywhere, and hopefully that will be enough for him.

Welcome to .. :. PetLvr Random Links I’ve just got too many good links in...

Have you ever wondered, “Is my dog submissive?” In moderation, submission is a good trait...

Planning Your Hobby Aquarium By Nick Bulka So, you’ve decided to start a hobby aquarium....

Oh .. this was an interesting email I just received: Fellow Dog Lovers and Pooch...

Aggressive Dog Breeds – Nature Vs Nurture By Colin Pederson Aggression in dogs does, and...

How to Choose the Right Puppy For You By Gary Nave AWWWWWâ€¦who can resist the...

Since rabbit urine can have an overpowering smell, litter training is something most pet owners...