In 1997, my future husband Hartley (HART) and I moved into a townhouse condo together. That next year, during tax time, Hartley would spend many hours at the office away from our new home, preparing tax returns. I found myself alone and in need of some company. Since our condo has a small back yard, I felt now was as good a time as any to get a dog. I had never had a dog and I was very eager to adopt a new member into our little family. Since it would be my first time as a dog owner, I wanted to start with a small breed.

One Sunday, Hartley and I headed off to the Winnipeg Humane Society to see what we could adopt. I looked at all the dogs and puppies they had up but they were all medium to large mixed breeds. I was a little despondent, not only because I didn’t find the dog of my dreams, but I felt I should save all the dogs that I was leaving behind. So, while Hartley was looking at whatever he was looking at, I wandered off into another section of the building. I inadvertently walked into the room where all the kittens and cats were displayed. I didn’t want a cat, I had cats before and it was time for a dog. But instead of walking out, I looked around. There was one cat that had a sign on it’s cage which read “GREAT CAT!”. I asked an attendant if I could have a closer look at that cat, and as soon as he was in my arms, I knew I had found a really great cat. He was so affectionate and purred as soon as I held him. He was beautiful too, large yellow eyes and long black fur. This was it, he may not have been the dog of my dreams, but he certainly was the critter of my dreams.

We were told by the people at the Humane Society the Zeus’s estimated age was about 6 months, based on his size and weight. Were they ever wrong! Within about 5 months, Zeus must has doubled in size! He was probably only 3 or 4 months old when we adopted him. Our little kitty is bigger than either of our papillons!

The next time we get a dog, it will definitely be a rescue! It may be a pup, or even an older dog, which has benefits. It might even be another cat?? Who knows! Stay tuned …

Here’s a picture of Zeus the Cat .. also know as Zeussie Pussy Cat! 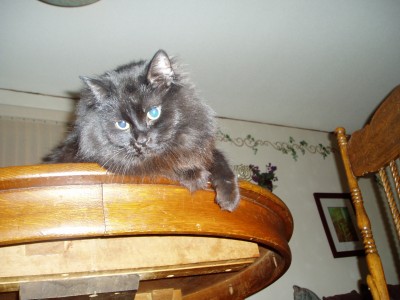 Cat Litter Box Health Considerations by RC Wellborn Cats are the most popular pets in...

Rescue Dogs by Simon Harris We have all grown up with at least one hero...

I am pleased to introduce Robert Akehurst to both this PetLvr Blog and the FishLvr...

While most people think of pet birds as animals that just sit in the cage...

By Srinath Nath Dog grooming means maintaining of the cleanliness and appearance of the dogâ€™s...

You Can Vote Once Every Day! I’ve added a button in the sidebar, when if...

How to Find a Great Pet Sitter – 5 Tips for People With Pets By...

* PETLVR’s “Pet Rescue Links” Page I have updated my blogroll and links page and...